Tech-savvy students and their innovative ideas awarded by BIMA 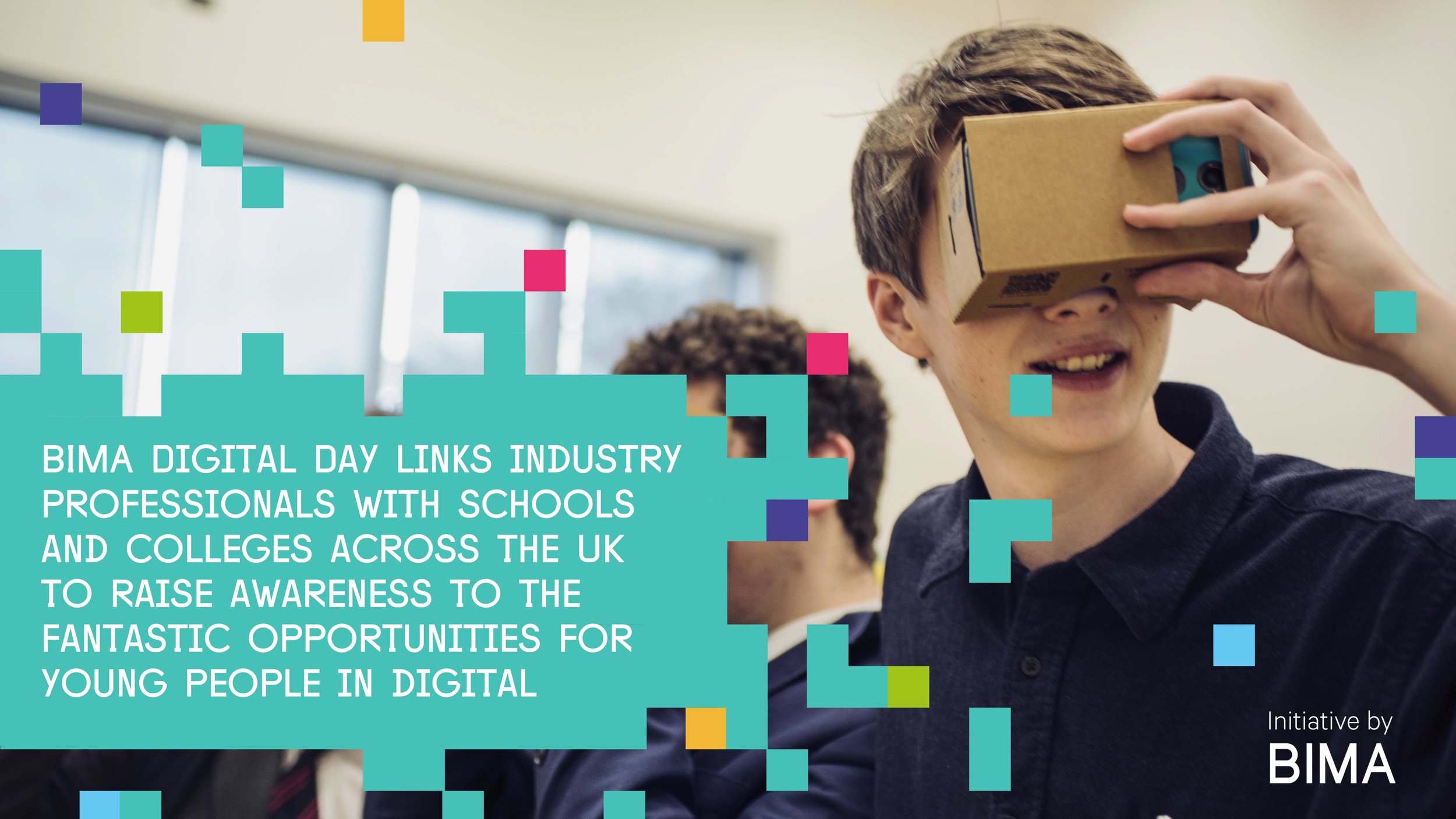 ● Selected from over 300 entries, BIMA Digital Day winners came from schools in the Northwest and Southeast England.

● BIMA Digital Day helps thousands of UK students learn about the potential of a digital career.

(London, 23 January, 2019) Winners of the sixth annual Digital Day were announced today by BIMA, the UK’s digital trade body. Student teams from The Burgess Hill Academy in Sussex, Abbot’s Lea School in Liverpool and London’s Westminster Academy were each declared a winner of one of the activities set by Digital Day Challenge Partners Vodafone, BBC Studios and The FA.

Each winning school will receive a cash prize and the winning teams will attend a workshop hosted by the Challenge Partner. The students will work with tech specialists with the ambition of bringing their ideas to life.

Digital Day aims to give young people an insight into the variety of careers available in digital. Each November, UK’s leading digital experts head back to school for a day. This year they helped over 5000 students, solving real problems set by famous UK brands.

Vodafone’s brief was to bring the high street to people with access issues or disabilities. The team from Abbot’s Lea School devised a VR game that could make shopping less overwhelming for people with autism in response.

BBC Studios asked students for a big idea to promote its new digital-only series Earthlings. The team at The Burgess Hill Academy came up with an interactive billboard and social media campaign to engage potential viewers and encourage empathy for different cultures.

The team from Westminster Academy created an app and VR campaign that would integrate with with high street fashion retailers to increase young girls’ engagement with football and boost viewership of the Lioness’ upcoming FIFA World Cup games, in answer to The FA’s brief.

Russell James, Director of Digital Engagement, The Football Association, says: “Our winner thought about how technology could be applied to everyday life, using digital to connect girls with the power of football in a meaningful way.”

Jasmine Dawson, Head of Digital Strategy and Planning, BBC Studios, says, “We were so impressed by our winners ingenuity and loved how they had thought through their audience insights in order to deliver maximum impact. They combined thoughtful digital innovation with creative storytelling to deliver a fantastic idea that we really excited to further with them!”

Additionally, three teams at Bournemouth School for Girls were Highly Commended, along with three teams from Scotland; Bishopbriggs Academy in Glasgow, Caldervale High in Airdrie, and Largs Academy.

Two teams from schools in the Northwest also gained Highly Commended honours; The King’s School in Macclesfield and Childwall Church Of England Primary School in Liverpool, one of only two of Digital Day’s participating Primary schools.

BIMA Managing Director, Holly Hall says, “We see such variety and sophisticated ideas from Digital Day teams, and this year has been no exception. The UK’s students are digitally savvy, what they don’t understand, is how they can apply that knowledge to a progressive, lucrative future career in the digital and technology sector, the fastest growing industry in Britain.”

Hall continues, “Digital Day doesn’t happen without our Challenge Partners, BIMA members, and schools across the country committing to making a difference in young people’s lives. Digital Day is about far more than a single day of activities, it helps to change lives and enrich the pipeline of talent entering our industry.”

“The computing curriculum is so theoretical, BIMA Digital Day gave me a completely different perspective from what I’d learned in the classroom and it made me want to study it at college. I wish I’d had this kind of exposure at a younger age, as it took practical experience for me to understand what I could be doing.”

“I really struggled in school. I had taken IT at both GCSE and A-Level but neither course spurred on my enjoyment for IT and the course curriculum was way behind the industry. BIMA Digital Day opened my eyes to the fact that I could have a creative and challenging career. I did work experience with the agency that came to our school, and ended up with a full time job, which I excelled in.”

Rachel has recently joined BIMA having worked for more than 20 years in the world of Marketing.
Rachel has many impressive client, charity and agency-side results to her credit and stories to tell.
As both a team player and independent advisor, Rachel loves to see the bigger picture and is a strong strategic thinker. She has led ambitious projects for start-ups, worked alongside growing businesses and has been fortunate to work with some of the UK’s most respected and renowned agencies.
A self-motivated original thinker, Rachel is also an extremely able marketer. She brings out the best in people at all levels. Her wealth of transferable skills includes project management – often with direct budgetary control – results-driven commercial awareness, proven networking strengths, digital marketing expertise and broad IT literacy.
However, her achievements do not end there!
In her spare time, she makes full-use of her Cumbrian home-town environment, walking, biking and running, and spending time as an enthusiastic side-line rugby and football mum for her two boys – Louie and Harley.