It’s no secret we love Umbraco, but how did it come to exist, what made it grow to become so popular and how is it different from other CMS platforms on the market?

To celebrate Umbraco’s sixteenth birthday we’re going to take you back down memory lane, looking at why the platform was initially created, and looking back at the platform all those years ago through to the latest version we have today. (and everything else in between)

Although the open-source of Umbraco was released on 16th February 2005 which is what we are celebrating today, the story does technically start a little earlier than that.

The main mission behind it was to build a CMS that was quite simply easy and effective for its users. So where did it all start? Well like many great things in life it began, where most of today’s incredible inventions start, and that being ‘the parents’ garage’.

Niels Hartvig, the brain behind Umbraco, was introduced to CMS’s in his first job out of school but was getting ever more frustrated with the ones presented to him; so he decided to go and create his own! After a few prototypes, building and maintaining websites Umbraco was born. When deciding on a name for this new platform Niels realised that many CMS companies at that time had the words ‘web’ or ‘site’ in their name and he wanted to try something a little more unique.

The name Umbraco originated from basically an Allen Key, you know that tool used to help assemble furniture, and simply was given its name as this new CMS was a simple tool that will enable people to build amazing solutions for their clients. In Denmark Allen Key is otherwise known as ‘Unbrakonøgle’ and fun fact for you, did you know that the very first logo for Umbraco was hexagons which any budding DIY’er will know it’s the iconic shape of the Allen Key.

In 2003 Umbraco version 1.0 was announced. It was made in a combo classic ASP, COM objects written in VB.NET and .NET web services written in C#, this was the framework that would later transition into the open-source butterfly we know of today.

But, we had to wait until 2005 where Umbraco 2.0 was released on February 16th as an Open Source CMS, which we call their official birthday. Alongside this release was also the very first Umbraco developer conference Codegarden to see the light of day which we have been very grateful to have attended in the past. (see below image for some cheesy smiles at Codegarden 2019 from some of our team) 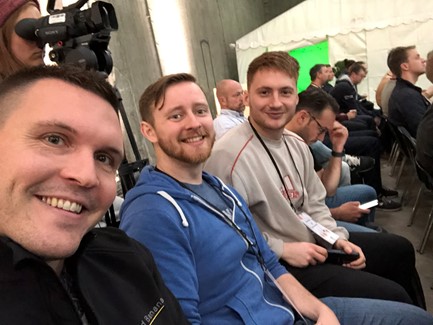 From 2005 the CMS just grew and grew, 2009 we saw the unveiling of ‘Our Umbraco’ the dedicated community for Umbracians. This was a platform used for both strengthening and continuing to grow the online developer community. And still to this day ‘Our Umbraco’ is every single Umbraco developer’s go-to place should they need any help, guidance or assistance with any Umbraco-related query.

Jumping forward to 2013, it was a busy year for the Umbraco community, The Source Code became available on GitHub which indeed make the CMS much more open-source friendly and even easier for developers to contribute to the source code by creating issues and making pull requests to fix bugs and suggest features. This was also the year both version 6.0 (January) and 7.0 (November) were released.

Another big year was in 2016, where Umbraco as a Service (now known as Umbraco Cloud) made its first appearance. This allowed people to collaborate and create better solutions. The next few years following only saw the CMS steadily grow, Codegarden was getting hundreds of attendees and more people in the tech community were noticing them.

Finally looking at its’ most recent years, In February of 2019 and 6 years after Umbraco 7 came to light and Umbraco 8 finally became a reality. This was a major jump, with the latest version came a much cleaner codebase and 3 brand new features including, Infinite Editing, Language Variants, and Content Apps. Umbraco quite simply stepped up the game massively.

So there you have it, a brief low down of the history and landmarks of our favourite CMS. As of today, the software has over 500,000 installs and nearly a quarter of a million active members in their growing community. Umbraco is very much here to stay. We’ve done previous blog posts on the advantages of using the platform and many reasons as to why you should be using it which you can read here.

So with all that being said, Happy 16th Birthday Umbraco and we look forward to seeing what’s to come for the next 16! And for all you Umbracians out there… H5YR!

We’re Cold Banana Studio. The .NET, Umbraco and Sitecore experts that specialise in agency partnerships and collaborations. Based in Bournemouth, we deliver integrated online solutions across the UK and Europe.

We’re proud to say there’s never been a problem we haven’t been able to solve. Working with a range of CMS’s, we apply our tried and tested methods to deliver powerful web and mobile projects that exceed client expectations.

Whether you’re an agency or an individual, get in touch today to find out how we can help you. Email us at info@coldbananastudio.com, call us on 01202 798601 or visit our website .