In commemoration of the 75th anniversary of VE Day and the part played in the Second World War by the people and places of the local community, Hartlebury based creative communications group DRPG lit up their 212 studios and global HQ building in red white and blue. 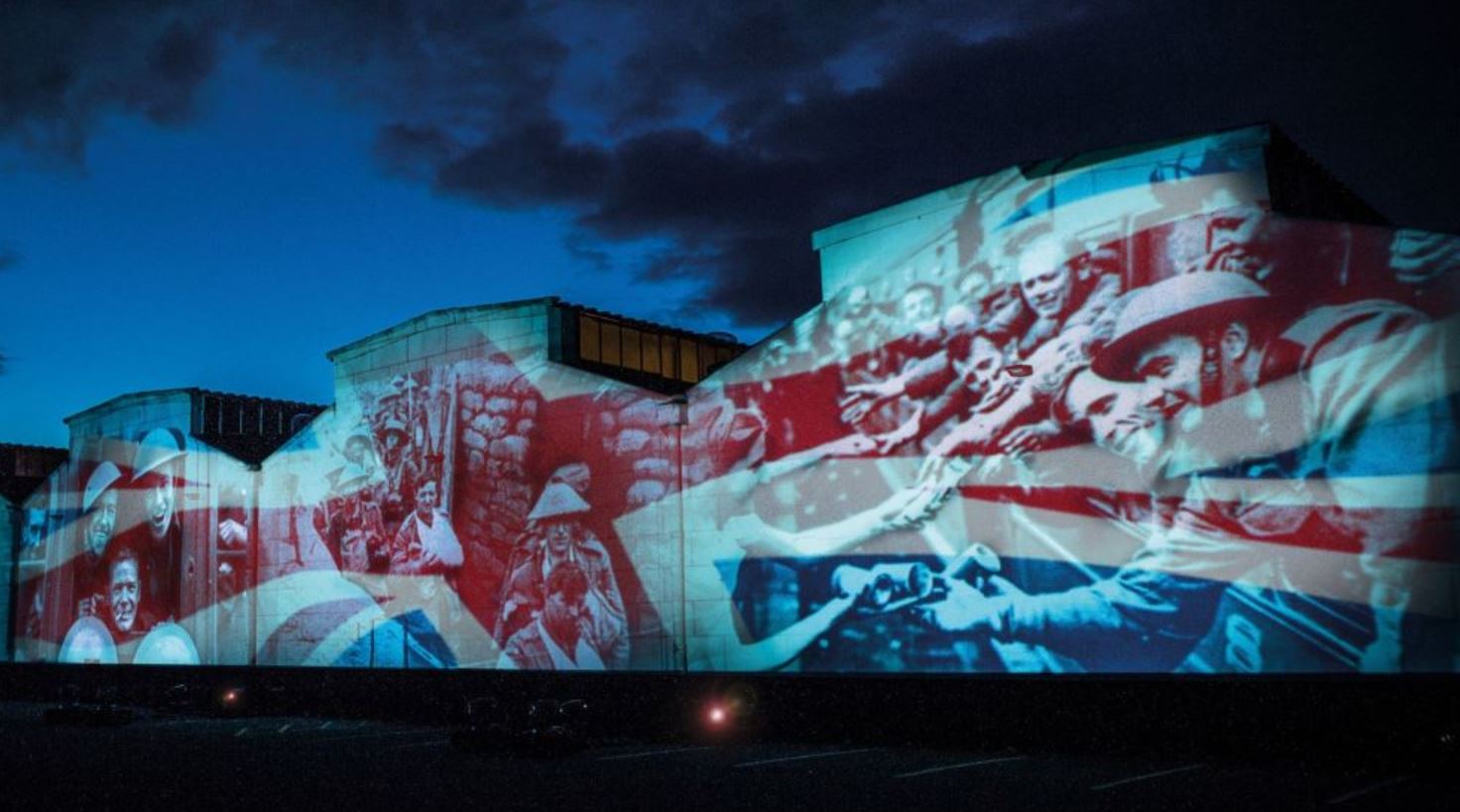 DRPG’s technical production and video teams collaborated from afar using the latest in laser projection technology to project the Union Jack flag and footage from WW2 across the face of their historically significant building, flying the flag for Britain and celebrating the hard fought peacetime in Europe in a spectacular display of solidarity and hope. Focussing on the soldiers and people of the Second World War, the projection was a tribute to them and a sign that their sacrifices will never be forgotten.

Jason Adams, DRPG’s new business account manager has done extensive research into the building’s fascinating military history, “As global conflict threatened in 1938, No. 25 Maintenance Command R.A.F. Hartlebury (now known as the 212 Studios and global HQ of DRPG) was commissioned. As one of ten bases within four groups that made up Maintenance Command, each location had responsibilities for supplying specific items, including anything and everything the R.A.F. inventoried. In the case of R.A.F. Hartlebury, it was propellers, air frame parts and Rolls Royce Merlin engines – to put it simply, anything plane related.

“With its location close to Kidderminster and in the heart of the Midlands – the workshop of the world – daily supplies were dispatched to all military bases in the region, as well as the dozens of factories given over to support the war effort. From the Gloster (Hawker) works in Hucclecote 25 miles due south, to the famous Vickers-Armstrong works in Castle Bromwich 26 miles to the north east, thousands of parts were sent on hundreds of vehicles as part of daily guarded convoys. These convoys fed hungry assembly lines, many of which would be building the iconic Spitfire fighters best known for spearheading Britain’s Fighter Command.”

Mr Adams added, “Necessity pushes people to uncover their potential, and in times of war, when freedom is in question, this couldn’t be truer. The diverse nature of the workforce and the subsequent allocated roles at RAF Hartlebury is something to celebrate and I’m proud to say this legacy and ethos lives strong in the building now through DRPG.”

Dale Parmenter, CEO of DRPG says, “We are proud of the heritage of our building and the part it played in supporting our Armed Forces, and for us, lighting it up was a small symbol of our gratefulness to the people and the places that played their part in bringing about peace in a time of worldwide struggle. It is so important, especially in times like these, to celebrate victory and the coming together of the people for good. We lit up our building in red, white and blue to demonstrate hope and we showcased those who took part in WW2 in remembrance of them and as a thank you for the sacrifices they made to achieve peace on this day 75 years ago. Our historical heritage has significantly influenced our purpose today: working together to inspire the communities and businesses of tomorrow.”

For more information on the history of the 212 building CLICK HERE.

From virtual reality and gamification to website development and app creation, we generate cutting edge digital solutions and interactive communications with a difference.

DRPG is creative communications group that’s packed full of passionate problem solvers. It’s our purpose to take the impossible and create solutions with impact, with ideas that get noticed, by people that get results. We listen, we learn and continually innovate to create effective communications.

If it’s your thing, it’s our thing.